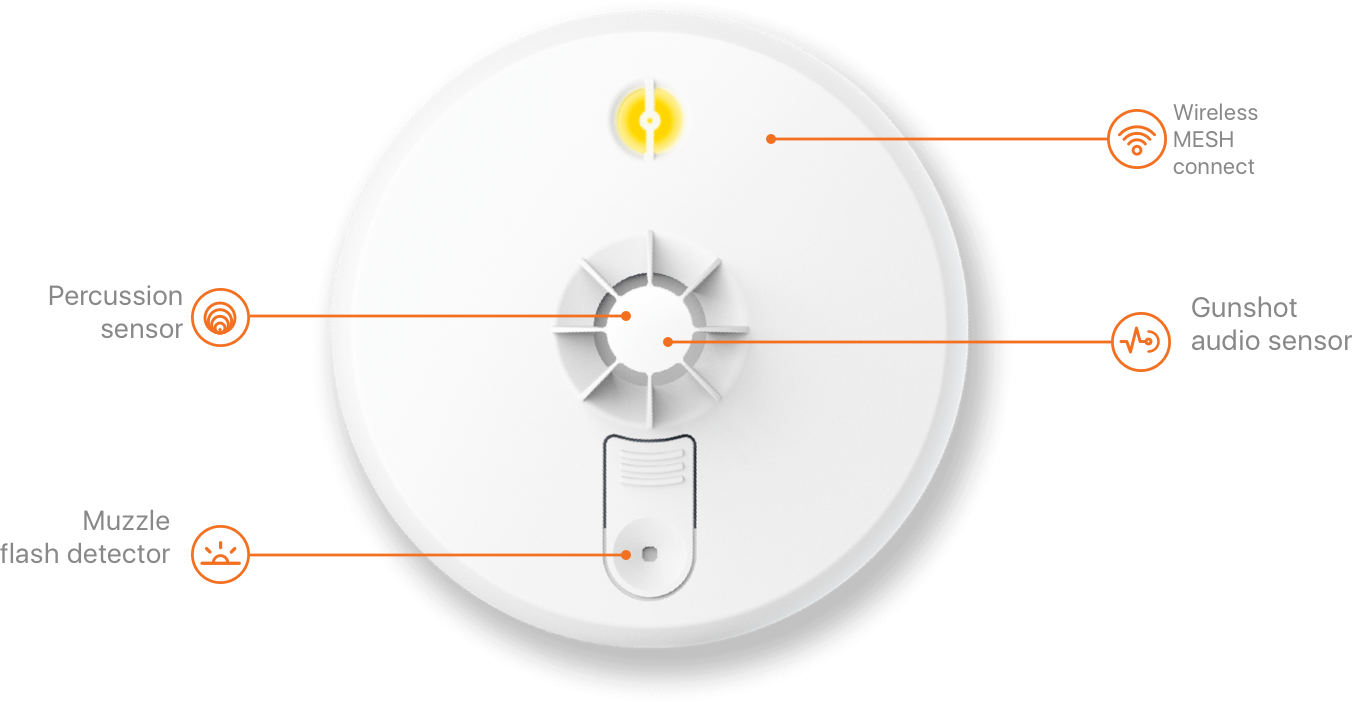 Gunshot detection systems sense for one or more characteristics associated with ammunition leaving the chamber of a gun. Sensing modalities include both sound and visual elements. To date, these systems have developed over three distinct generations of technology. Whilst gunshot detection technology has been in existence in various forms for nearly three decades, only now is it a truly practical and scalable solution to protect lives in real-world environments.

Gunfire can be characterized by three primary attributes, which allow for detection:

The muzzle blast - sound caused by high-pressure gases escaping the gun barrel as a bullet leaves the chamber.

The sonic boom “crack” - acoustic shock wave produced by the bullet traveling through the air at supersonic velocity.

The muzzle flash - visible light of a muzzle blast caused by the combustion of gunpowder mixing with the ambient air.

What are the Three Generations of Gunshot Detection Technology?

The first iteration of gunshot detection systems were developed and deployed in the 1990’s. These detect the acoustic characteristics of a gunshot and look for sound or wave energy levels which exceed the approximate threshold produced. Such percussion only systems seek to identify both the muzzle blast and sonic boom. The system recognizes likely gunfire events based on these audio characteristics, and if triggered, an audio snippet is transmitted to a central server for human vetting.

Percussion only systems are most suitable for outdoor, long range deployment. They can detect audio within a 2 mile radius, but experience the issue of extremely low accuracy rates. Loud sounds including fireworks, power tools, and helicopters can all trigger the system, causing false alarms. In excess of 50% of activations are estimated to be false positives or negatives. In addition to the false alarm rate, percussion only systems generate privacy concerns. Such first generation detectors send their live audio back to a central monitoring center, where it is recorded and analysed for the presence of a gunshot. This privacy issue has blocked installation in multiple educational establishments. Furthermore, the need for human verification creates additional delay in coordinating first responders, further reducing the effectiveness of the technology in an unfolding emergency.

The second generation of gunshot detection technology incorporates the basic audio characteristics of generation one, in addition to sensing for an infrared muzzle flash. Such technology was developed 10 years ago, and subsequently licenced or recreated by other vendors, specifically designed for indoor use.

By detecting the muzzle flash and basic audio characteristics produced by gunfire, false alarm performance is improved. However, as the detectors register the visual effects of gunfire, the range of each detector is short, and crucially, line of sight is needed to trigger. This necessitates a high detector density, resulting in prohibitive costs and minimal application possibilities. Finally, the requirement to calibrate systems with blanks in real-world environments also severely limits scalability.

The third generation of gunshot detection technology has the most advanced sensing capabilities of any system available on the market today. Tri-factor authentication technology encompases the detection capacity of earlier generations, with an additional machine learning algorithm. This contemporary system senses for either the infrared muzzle flash or percussive blast, whilst also utilizing machine learning sound analysis to verify gunfire. Each individual detector incorporates machine learning, comparing audio detected against a database of over 3,000 gunshot samples and 10,000 non-gunshot samples, stored on every detector.

Crucially, by analyzing a combination of these factors, a third generation system does not require line of sight to trigger and has a near-zero false alarm rate. By circumventing the need for line of sight to activate, each detector is able to reliably cover a significantly wider area, and sense through walls, whilst still maintaining its accuracy rate. This innovative method delivers fast detection at the detector head, without the transmission of any real-time audio data across the network, eradicating the network vulnerabilities present in generations one and two. As such, these factors render third generation detection technology the most viable for large scale deployment, both economically and practically and offers optimum performance in ever demanding circumstances.